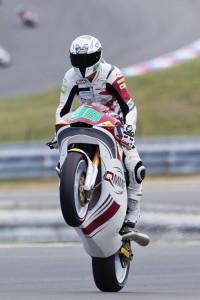 Anthony West failed a drug test earlier in the year and will face a one-month ban from motorsports as a result.[/caption]

The FIM recently announced that Australian racer Anthony West failed a drug test earlier in the year and will face a one-month ban from motorsports as a result. The test took place at the French Grand Prix at Le Mans on May 20.

One of West's samples contained methylhexaneamine, a prohibited substance. More commonly known as DMAA, methylhexaneamine is a dietary supplement that is also found in some nasal decongestants, Cycle News reports. The drug is relatively common in training supplements sold out of drug or nutritional stores, and despite being chemically related to many amphetamines, the stimulant is only slightly stronger than a cup of coffee, according to The Toronto Star.

The FIM brought West in for a hearing after receiving the results, and from there decided to ban him for one month. The rider was also disqualified from the French round of the Moto2 circuit, where he finished seventh.

The ban comes at an unfortunate time for West, who just rode two of his best races during the Moto2 rides at the Malaysian Grand Prix and Phillip Island. West has five days to appeal the suspension, but it is currently unclear if he will do so.