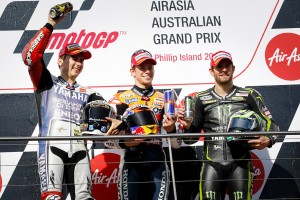 may have won the Australian Grand Prix at Phillip Island over the weekend, but it was Jorge Lorenzo who left as the big winner after clinching the MotoGP World Championship.

It was the sixth consecutive win at Phillip Island for Stoner, who had the support of the Australian crowd as he competed in what is likely the final home race of his career. Stoner had a strong start to the race, as he and his Honda teammate Dani Pedrosa tried to set the pace early. Pedrosa, however, crashed during the second lap, effectively ending his quest for the championship and handing the title to Lorenzo.

"Today all I had to do was finish the race and I have become World Champion for the second time," said Lorenzo. "It's such a sweet feeling. I want to thank all the team, Yamaha, my family, my friends, sponsors and fans who support me. Today is an amazing moment. We've been very patient, very concentrated and finally the World title arrives."

Lorenzo finished in second, crossing the line just under 10 seconds after Stoner. With one motorsports race remaining on his home track in Spain, he'll look to add another strong performance to his season, which saw six wins and 10 second-place finishes.