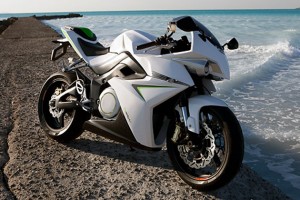 Italian manufacturer CRP is set to reveal a prototype of its upcoming Energica motorcycle, Motorcycle.com reports. The company will present its new electric streetbike to the masses at the Casa Enzo Ferrari Museum on November 7.

The bike is the result of concentrated efforts by the company to improve its electric offerings. CRP spent the year focusing on developing a new bike for production instead of racing in the e-Power series, despite past success in the circuit. As CRP's background is in racing, there are some motorsports influences seen in the 2012 prototype. However, the main goal of the Energica is to tap into the market for efficient motorcycles and street bike gear.

According to The New York Times, the appeal of electric motorcycles is "obvious," as they are quiet yet powerful machines that would likely be more affordable than traditional bikes in the long run.

CRP may have built its company around providing electric bikes for the masses, but there are other manufacturers who have begun moving toward a more energy-efficient model. Honda currently features a gas-powered streetbike that gets an impressive 77 miles to the gallon, while Zero Motorcycles in California is the only company in the U.S. actively producing and selling electric streetbikes.