Charlie Mullins Proves To Be The Ultimate Ironman With Win 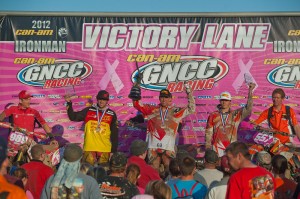 Charlie Mullins nabbed his first win of the season at the Ironman Grand National Cross Country Series in Indiana.

The 12th round of the motorsports series proved to be a challenging one for Mullins, who had to battle competitors like Paul Whibley, Thad DuVall, and Kailub Russell, all of whom have had recent success on the track. It looked like Whibley was going to walk away with the victory, but he ran out of gas during the final lap and ended up in fifth place, Cycle News reports.

"It feels good to get a win," Mullins told the news source. "The track was really tough and it took a lot of energy out there and I was happy to see that checkered flag. It was a tough day, and Paul and Thad didn't make it any easier. I made a lot of mistakes out there, but nothing too major, so I was able to hold on for the win."

DuVall claimed second, while Russell's third place finish was enough for the KTM rider to regain a lead in the championship standings. There is only one round remaining in the GNCC series, and Russell has a one-point lead over Whibley.