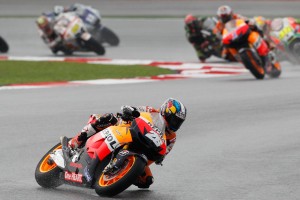 Dani Pedrosa looked unstoppable as he collected his third straight MotoGP victory and sixth of the season.[/caption]

Dani Pedrosa prevailed through rain and wet conditions to win the Malaysian Grand Prix in Sepang. The Honda rider looked unstoppable as he collected his third straight motorsports victory and sixth of the season.

Pedrosa and championship rival Jorge Lorenzo were once again the two riders to separate themselves from the pack early on. The lead went back and forth between the two, with Pedrosa eventually passing Lorenzo halfway through the race. When the flood-like conditions forced the race to end five laps later, Pedrosa was still in front to claim the victory. Lorenzo was second and Casey Stoner finished third.

Heavy rains drenched the competitors from the start of the race, and the race director threw the red flag to halt the race about two-thirds of the way through. As the riders waited in their pits, the weather only intensified, forcing officials to call off the remaining laps and finalize the results.

"This victory is really amazing for me; it's the first time I've won in the wet in my life and I'm really, really happy," said Pedrosa. "I want to thank my team and the people who helped me to get here because when I started racing in these conditions, I was weak and they know how difficult it's been during all this time."