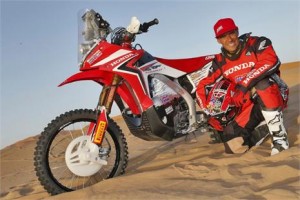 checked in after day one of the 6 day 1300 mile Morocco Rally to let us know Honda took the stage 1 victory for the HRC Rally team in dominating fashion. Enthusiasts the world over have been longing for Honda to return to Rally racing and now they have something to cheer about. Honda is back and the engineers at HRC have built the ultimate Rally bike.

"The track today was very fast, let's say 90% very fast track and 10% off track in the dunes. There was a lot of rocks and dust but in general it was ok. This is the first major Rally race I have competed in since 2001 so it takes me a little time to get into the race rhythm again, in terms of speed and intensity, while physically I'm ok. I made some navigation mistakes and I lost 10 minutes before arriving at the service. Then I regrouped and finished 16th. The CRF 450 RALLY is working really well, it has strong power and I look forward to the next stage." -- Johnny Campbell

The Morocco Rally in a planned shakedown race for the new team and bike. The team is an international blend of speed, durability and experience on and off the bike. The Honda CRF450 RALLY is a HRC factory built bike that is expected to re-write the book on Rally performance like only Honda can. Portuguese - Helder Rodriguez, Brazilian - Felipe Zanol, United States - Johnny Campbell, British - Sam Sunderland and Argentine - Javier Pizzolito.