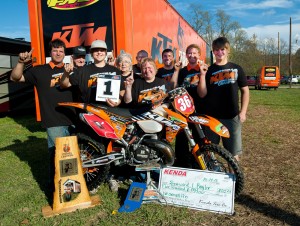 KTM rider Steward Baylor was crowned the 2012 AMA National Enduro Champion after claiming his sixth victory of the season at the 9th round of the series, the Muddobbers Enduro.

The new crown marks Baylor's first career AMA National Enduro Championship. Not only did Baylor win the championship in his first full-time year in the series but he also managed to claim the title despite nagging pain from a broken wrist suffered near the beginning of the season.

Baylor never let off no matter how bad the pain or how tough the competition. This is proven by the fact that he still managed to win the Muddobbers Enduro this weekend. He took the victory in three of the tests and placed inside the top three in each of the tests he didn't win. When it was all said and done, he was able to walk away with the win by a nearly 40 second gap over the second place ride.

"It feels great to have all of the hard work finally pay off," stated Baylor. "It has been a tough season and I am very happy to win my first championship and very thankful to my family and my team for all of their hard work to help get me here."

Baylor will now go back and recover before heading to the next GNCC event where he is also in the championship chase in the XC2 division.