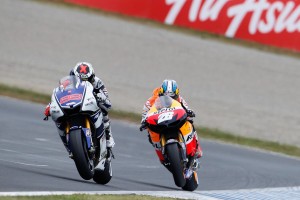 Dani Pedrosa and Jorge Lorenzo exerted their dominance on the track once again as they clinched the top two spots in Motegi, Japan.[/caption]

The top two MotoGP motorsports racers exerted their dominance on the track once again, as Dani Pedrosa and Jorge Lorenzo clinched the top two spots in Motegi, Japan.

Lorenzo started the race in the lead, which he maintained for the first 11 laps. During the 12th, however, Pedrosa began to make his move, eventually firing past Lorenzo and crossing the finish line approximately four seconds ahead of the Yamaha rider.

The victory, Pedrosa's fifth of the season, was the Honda rider's career-best and helped the Spaniard cut Lorenzo's lead in the championship standings. The two are now separated by 28 points with three rounds still remaining.

"I was completely at the maximum trying to stay with Dani but today we had such different performance on the straights and he was also riding really well," said Lorenzo. "I tried to stay with him but it was impossible, maybe next time it will be different. For sure the Championship is closer now, but we are still very competitive and have the chance to win."

Outside of the top two, the rest of the Japanese Grand Prix was relatively drama-free. Alvaro Bautista, Andrea Dovizioso and Casey Stoner rounded out the top five finishers.