Previewing The MotoGP Matchup At Motegi 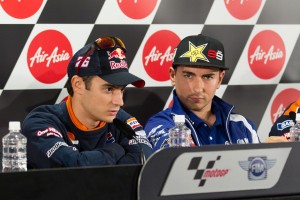 Jorge Lorenzo and Dani Pedrosa are the two favorites heading into the weekend, with Lorenzo currently 33 points ahead of Pedrosa in the standings.[/caption]

The MotoGP is coming down to the wire, and this weekend's 15th round at the Motegi track in Japan should have championship implications. At the first of three back-to-back motorsports races before the season finale on November 9, riders will be pushing themselves to earn those valuable points.

Jorge Lorenzo and Dani Pedrosa are the two favorites heading into the weekend, with Lorenzo currently 33 points ahead of Pedrosa in the standings. However, strong races from Pedrosa can make up the difference and give the Spaniard the crown.

"Motegi is a race I always look forward to," said Pedrosa. "It's the most important weekend for Honda and I really enjoy the circuit. We have now the most demanding period of races ahead, but we will keep taking things step by step, thinking race by race."

There should be an added level of suspense this weekend, as Pedrosa's teammate Casey Stoner is set to make his return to racing. Stoner has been out several weeks after undergoing ankle surgery, but the Aussie rider is looking to show that he is still healthy enough to earn a spot on the podium. He is just one of several competitors who will try to upset the favorites, including Nicky Hayden, Ben Spies and Valentino Rossi.