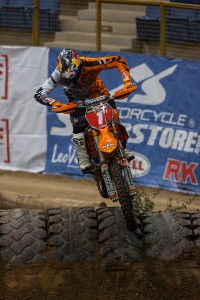 Taddy Blazusiak led every lap of the fifth round of the AMA EnduroCross Series to take the win - Photo: Drew Ruiz[/caption]

Red Bull KTM rider Taddy Blazusiak led every lap of the fifth round of the AMA EnduroCross Series to take the win in front of a packed stadium at the National Western Complex. His KTM teammate, Factory FMF/KTM rider, Mike Brown, earned the final podium spot with a 3rd place result.

Blazusiak set the bar in the late afternoon after earning the fastest lap time in the hot lap session. Brown also turned a decent time during the hot laps to earn the fifth fastest time of the evening.

In the night show, Brown was up first in the second heat of the night. He launched off the line to grab the holeshot and take the early lead. He checked out on the rest of the field and went on to lead every lap to take the win and a transfer spot to the main event.

Blazusiak was up next in heat number three. He started 5th off the line and quickly made a pass into 4th by the end of lap one. A lap later he had rocketed his KTM into 2nd place and soon was able to pass by Cody Webb in the fire pit area to take the lead. He led the remaining laps to take the heat win and a spot on the main event gate.

In the main event, it was X-Games EnduroX gold medalist, Mike Brown, with the holeshot. Blazusiak, the reigning EnduroCross Champion, also had a good start and was sitting in 4th around the first corner. Blazusiak wasted no time picking up positions and had moved into 2nd place by the fourth corner and took over the lead through the matrix section of the first lap. 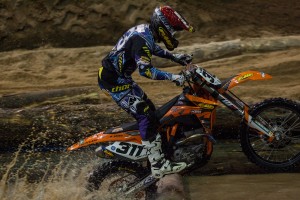 Once in the lead, Blazusiak never looked back and went on to pull away to a comfortable gap. Blazusiak rode a mistake-free race to take the victory. Meanwhile, Brown battled with Taylor Robert for 2nd position throughout the ten lap main event. The two swapped positions twice in the matrix section with Robert just edging out Brown on the final lap. Brown hung on for 3rd to land his KTM on the podium.

Blazusiak's victory in Denver marked his third win of the season. With three rounds remaining, Blazusiak now has a 31 point lead heading to the sixth round of the series.