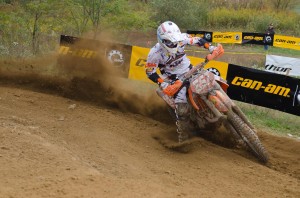 The overall win was a big boost for Kailub Russell, who is now only 4 points behind Paul Whibley in the overall championship point standings - Photo: Shan Moore[/caption]

Factory FMF/KTM riders Kailub Russell and Charlie Mullins topped the podium at the eleventh round of the GNCC Series held at Power Line Park finishing 1st and 2nd respectively. The overall win was a big boost for Russell who is now only 4 points behind Paul Whibley in the overall championship point standings.

Russell and Mullins both started the race inside the top three. By the end of the first lap both riders had passed Whibley and began to charge forward out front. After Whibley suffered a crash, it was just the two FMF/KTM teammates battling out front for the remainder of the three-hour endurance race.

On the final lap, Mullins was able to make a pass on Russell for the lead but made a mistake shortly after that allowed Russell to get back by. When the riders approached the finish line they were wheel to wheel. With a little extra gas, Russell was able to edge out his teammate to collect the win.

"We are very proud of both of our riders today," remarked Factory FMF/KTM Team Manager Antti Kallonen. "Mullins is still riding injured after hurting his shoulder at the ISDE and we are thrilled that he was able to give such an impressive performance today. Russell also rode strong all day and is very determined to keep his bike on the top step of the podium in the final two rounds. The points chase is very close and we expect it will come down to the wire." 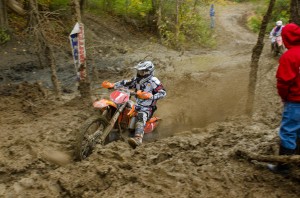 Charlie Mullins is still riding injured after hurting his shoulder at the ISDE, yet he was able to give an impressive performance - Photo: Shan Moore[/caption]

"It feels great to get the overall win," stated Forsberg. "It has been our goal since the beginning of the year and we have come so close a few times but finally got it today. It is always a good feeling to win your class but to lead the overall is an accomplishment I am very proud of."