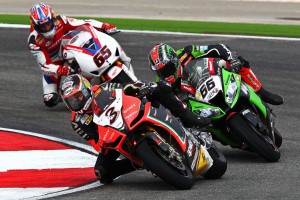 Italian rider Max Biaggi is the favorite entering the final World Superbike round, with a 30.5 point lead over Tom Sykes.[/caption]

The final race of the 2012 World Superbike Championship will take place this weekend at Magny-Cours in France.

Italian rider Max Biaggi is the favorite entering the motorsports event, with a 30.5 point lead over Tom Sykes. Biaggi can win his sixth world title with a solid finish, as he only needs 20 points to clinch the championship. His previous races on the French track have all been top six finishes, including a win in 2010.

Marco Melandri will be looking to rebound at Magny-Cours, after a crash in the opening lap of the previous round prevented him from finishing the races. He was also unable to gain any points, dropping the Italian from second to third in the standings. Nevertheless, the BMW rider is aiming to finish the season strong despite his injuries.

"It is a difficult but interesting circuit, which offers a combination of everything," said Melandri. "I had a lot of fun there last year and that is my target for this year, too."

The manufacturer's title is still up for grabs, with Biaggi and his Aprilia team currently leading the way. BMW is not far behind, and reigning champion Ducati is still within striking distance of the championship as well.