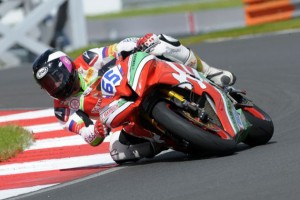 As previously reported, Jonathan Rea will return to the Honda squad to anchor its superbike efforts.[/caption]

With various motorsports seasons coming to an end, many factory teams are beginning to announce their 2013 lineups. Honda is no exception, with the motorsports manufacturer revealing its teams for next year's superbike and supersport championships.

As previously reported, Jonathan Rea will return to the squad to anchor its superbike efforts. He will be joined by fellow Brit Leon Haslam. In the supersport division, Lorenzo Zanetti and Michael van der Mark will race for Honda. Zanetti previously raced for the manufacturer in 2004 and won the Grand Prix Cup in Italy.

"It feels good to be coming home to Honda after winning the RS125GP Cup in Italy," said Zanetti. "This is a great opportunity for me to ride for the team that has won eight of the last 11 World Supersport titles... The chance to work with such professional people and to be a part of the big Honda family is one that I hope I can maximize and enjoy as much as possible."

Zanetti came in third overall during the 2011 superstock season and has spent the majority of 2012 competing in the superbike division. He will join the 19-year-old Van der Mark in the supersport division, as the two look to improve their skills and attempt to win the championship.