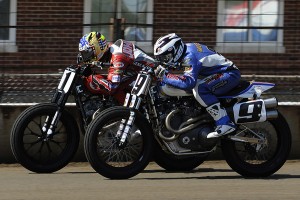 On Sunday, September 30, some of the biggest names in flat track racing will head to the Sonoma County Fairgrounds to take part in the Santa Rosa Mile. This race will mark the return of motorsports to Santa Rosa after a 42-year absence.

The Northern California race will act as round 14 of the season's 16 events for AMA Pro Flat Track Racing. Riders will be competing for ever-valuable points in an attempt to improve their rankings in the Grand National Championship standings.

Cycle News reports that Jared Mees leads the pack with 243 points, just 12 points ahead of defending champion Jake Johnson. Sammy Halbert is currently in third place but is only 23 points away from the top spot. Bryan Smith, who won the Springfield Mile a few weeks ago, sits in fourth while Brad Baker is in the fifth position.

Mees has set the standard so far this season, racking up one win and eight podium finishes through the first 13 rounds. He already claimed the 2012 AMA Pro GNC Expert Singles title and is looking to add the Flat Track championship to his resume.