Loris Baz Sticks With Kawasaki In 2013 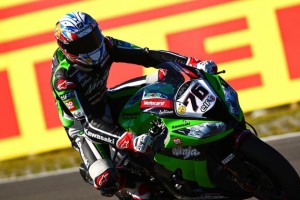 Loris Baz claimed three podium finishes and one win, convincing Kawasaki he was ready for the full schedule next year.[/caption]

Loris Baz and Kawasaki have reached an agreement that will keep the motorsports rider on the team throughout the 2013 FIM Superbike World Championship season.

The 19-year-old rider was brought up to the official Kawasaki racing team as an injury replacement for Joan Lascorz. In his half-season in the superbike class, Baz claimed three podium finishes and one win, and his success convinced the team he was ready for the full schedule next year.

"I am really happy, as you can imagine," said Baz of his signing. "Since I first got on the official Kawasaki Racing Team bike I have done everything I could to stay for the future. I think it is one of the best bikes and best teams so I did not want to go anywhere else. To stay in this team was the best for me."

Baz, the 600 European Champion in 2008, will be joining Tom Sykes on the 2013 team. Sykes has had a strong 2012 season, and he currently sits at second in the overall superbike standings with one race remaining. Kawasaki hopes the two young riders will contend for a championship in the next season.