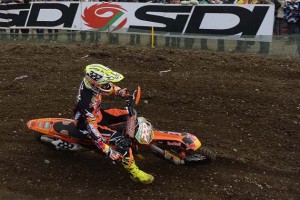 Tony Cairoli closed out the last motocross grand prix of the year with the 2012 championship title.[/caption]

Tony Cairoli closed out the last motocross grand prix of the year in style, claiming his seventh consecutive motorsports win and putting an exclamation point on his 2012 championship title.

September 23 saw three classes end their seasons with tight races on the Teutschenthal circuit. The 40,000 spectators at the German track were treated to dominating performances and close finishes across the
races.

Cairoli swept both motos for the overall win, which was the KTM rider's 58th career victory. His teammate Ken Roczen finished third and second, respectively, in the two races to grab the second podium spot, while Suzuki's Clement Desalle finished third overall. 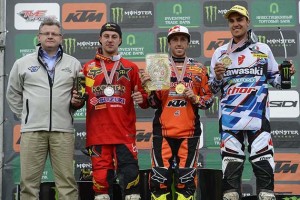 Tony Cairoli took the title while Clement Desalle came in a distant second, with Gautier Paulin claiming the third spot.[/caption]

The wins gave Cairoli a stranglehold on the championship, despite racing with an injured hand for the past few weeks. For the season, Desalle came in a distant second to Cairoli, with Gautier Paulin claiming the third spot.

Teutschenthal was also the site of the MX2 and MX3 finales. Kawasaki's Tommy Searle earned the win in MX2 with a sweep of the motos, and Matthias Walker took the title in MX3 after finished second overall for the day. According to Cycle News, Searle will move up a class to MX1 for 2013.