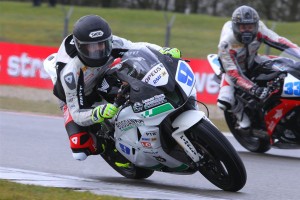 Coming off of a win at the Donington Superstock, American teenager PJ Jacobsen made his British Supersport debut this last weekend. He raced in the British Supersport series at Circuit van Drenthe in Assen, Holland - capturing first place in his second race, placing him second overall.

The 18-year-old entered the world of motorsports in July when he began racing in the Superstock class for Suzuki. The team hadn't intended on pushing Jacobsen through the ranks so quickly, but after he grabbed three wins at Donington, his success proved that he was ready to move up from the Superstock class.

"I'm really pumped to be getting to ride the Tyco Suzuki GSX-R600," Jacobsen said. "Donington was great for everyone, but Assen will be a whole new experience. I'm with a great team and a great bunch of guys, who I'm having a lot of fun with, so I just can't wait to get on the gas."

While on paper it appears that Jacobsen dominated the Superstock track, he has seen his fair share of dramatic finishes. He crossed the finish line 0.001 seconds ahead of Ducati's Lee Johnston to claim the top spot in his first race.