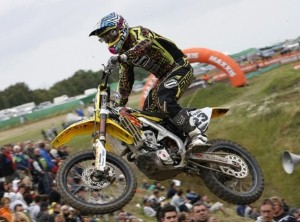 Thad DuVall claimed his first career XC-1 win at the Can-Am Unadilla GNCC this weekend, capping off an exciting return to action for the series.

The 2012 Grand National Cross Country series was on a two-month summer break prior to this event, when the 10th round of the 13-race season took place in New Berlin, New York. The young American rider rode neck-and-neck with the points leader Paul Whibley, but after Whibley had an issue with his dirt bike gear he couldn't catch up to DuVall.

"I probably rode one of the best races I've ever ridden today," DuVall told Cycle News. "We made a few changes over the summer and it really panned out."

DuVall's win was also the first for Honda in a GNCC motorsports event since 2007.

Whibley finished second, which was enough to maintain his lead in the point standings. He was one of the favorites going into the race, along with Kailub Russell. According to Cycle News, Russell suffered a crash in the third lap but continued on to eventually grab the fourth place finish and keep his second place ranking.