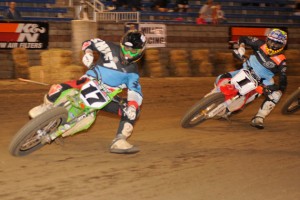 The Springfield Mile may have been the premiere motorsports event at the Illinois State Fairgrounds this weekend, but the short track races saw a thrilling come-from-behind win by Kawasaki rider Henry Wiles.

Wiles was in fourth for much of the race, but over the course of a few laps he moved up to second place. Brad Baker was the leader for the first 19 laps, reports Cycle News. A wide turn during the 20th lap cost him the top position, as Henry Wiles shot through the gap en route to victory. Wiles ended up beating Baker by 0.94 seconds for his third win of the season.

"It was back and forth and just an awesome race," Henry Wiles told SpeedTV. "I stayed low the entire time waiting for Brad [Baker] to go wide and when he did I just pulled the trigger and it paid off. It's been a phenomenal year and I want to give a shout out to my team and all of my sponsors. I'm glad I could go out there and ride for you guys."