Round 13 Of MotoGP To Kick Off At Misano 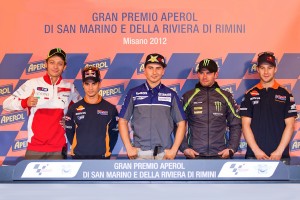 Some of the world's best MotoGP riders will be on the Misano World Circuit this weekend.[/caption]

Some of the world's best MotoGP riders will be on the Misano World Circuit this weekend, as the San Marino track will host the 13th round of the motorsports championship series.

Several riders and teams will not only be competing for top finishes, but also for the affection of the home crowd. Italian manufacturer Ducati is sure to be a favorite, as will its top racer Valentino Rossi. Cycle World reports that Rossi grew up less than six miles away from the Misano complex. Team San Carlo Honda Gresini has its headquarters within a few miles of the track as well.

"Misano is one of two home races for us, so there will be a lot of fans and a very special atmosphere, as is always the case when we race in Italy," said Rossi. "The track is challenging and difficult, but I like it alot."

Jorge Lorenzo and Dani Pedrosa are the early favorites after weeks of continued success landed them the top two spots in the point standings. They'll face tough competition from Rossi and Andrea Dovizioso, both of whom have had top-five finishes on the track in the past. Rider Nicky Hayden will also be looking to make an impact after missing several weeks with an injury.