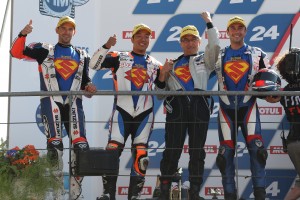 Suzuki Endurance Racing Team has won the 2012 World Endurance Championship after one of closest and most-exciting finishes at the Le Mans 24-Hour race in France.

SERT had led the race going into the closing stages but were given a time penalty for an alleged rule infringement during a pit stop, which put them back to second place, but the demotion to second place was not enough to clinch SERT's 12th World Championship with its total of 128 points from the five rounds some 24 ahead of BMW Motorrad France, with Yamaha France GMT 94 taking the bronze medal on 98 points. 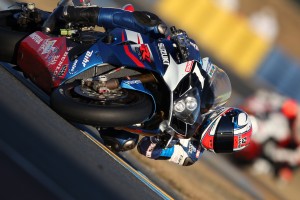 SERT rider Vincent Philippe led away the 35th-Anniversary Le Mans 24-Hours from the start from fastest qualifiers SRC Kawasaki; then swapped places several times as the race progressed. SERT led on several occasions, but the event was dominated from the front mostly by the Kawasaki trio of Julien da Costa, Gregory Leblanc and Freddy Foray as the Suzuki team played a calculated race to finish ahead of its closest rivals in the series - Yamaha France GMT 94, Honda TT Legends and BMW Motorrad France.

Said a delighted Team Manager Dominque Meliand, who has headed the most-successful team in World Endurance history for more than 30 years: "The main goal was to win the world title but we staked everything on the race win, as we really wanted to win our home race at Le Mans - and we didn't miss it by much..."