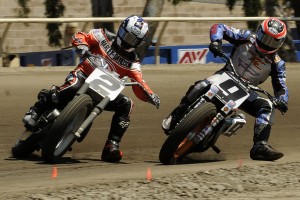 Kenny Coolbeth returned with a vengeance this weekend to capture a win at the Knoxville Half Mile - Photo: Dave Hoenig[/caption]

After a broken leg causes Kenny Coolbeth to miss most of the 2012 season, the Harley-Davidson rider returned with a vengeance this weekend to capture a win at the Knoxville Half Mile. The motorsports event was part of the AMA Pro Grand National Championship.

Coolbeth grabbed the lead after the fifth lap and never looked back. He crossed the finish line less than half a second ahead of teammate Jake Johnson.

"It's been a long season," said Coolbeth. "I really haven't been racing a whole lot, but when I do, I always show up to win. Harley-Davidson supplies me with all the best equipment and I owe a large thanks to them. Overall, it was a great effort by my entire team, we are all meshing right now and these boys better get ready."

While Coolbeth was celebrating, standings leader Jared Mees saw his points lead diminish. Mees experienced a motorcycle gear malfunction during the 15th lap of the race and ended up in 18th place, according to Cycle News. He now holds just an 11-point cushion over Jake Johnson and Knoxville's third place finisher Sammy Halbert.