Lake Elsinore Series Promises A Dramatic Conclusion To The Season 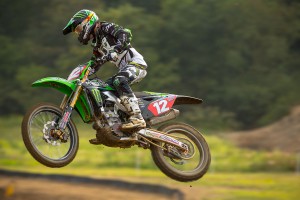 Still in the lead, Blake Baggett has a tight race ahead in the 2012 AMA Motocross 250cc Championship finale at Lake Elsinore - Photo: Frank Hoppen[/caption]

The inaugural race at Lake Elsinore Motorsports Park promises to be one for the ages. The 12th and final round of the 2012 Pro Motocross Championship will take place at the new track this weekend in Southern California.

Lake Elsinore will be the future home track for the United States national motocross competition, but before then it will act as host to the thrilling conclusion of the motocross season.

The men's 450cc class has already been decided, with Ryan Dungey wrapping up the title several weeks ago. However, the 250cc class and the women's championship are still up for grabs.

Dungey will still be racing for the win as he tries to match his record-setting rookie season that saw him rack up ten wins. He also has podium finishes in every moto he's raced this season. The 250 competition looks to be a bit tighter, with Kawasaki's Blake Baggett and Honda's Eli Tomac and Justin Barcia as the top racers to watch.

On the women's side, The Daily Bulletin names current points leader Jessica Patterson and her longtime rival Ashley Fiolek as the two most likely winners.