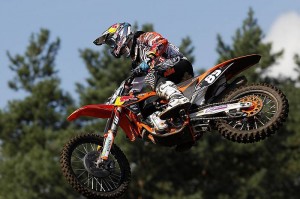 The 14th round of the 2012 FIM Motocross World Championship belonged to the KTM team.

Cycle News reported that KTM teammates Antonio Cairoli and Jeffrey Herlings each swept their respective motos at the Benelux Grand Prix in the Netherlands over the weekend. The win was Cairoli's sixth of the year and placed the Italian firmly on top of the MX1 standings. He will have a chance to wrap up the title in Faenza next weekend.

"I'm really happy about my riding over all the weekend, it went just the way we had planned in the team," Cairoli said through the KTM website. "Faenza is not one of my favorite tracks, it's a pretty easy track for everybody so it's important to get a good start, always to come out of the gate well and try to grab the hole shot, or at least be top three."

Dutch native Herlings also put on a show for the home crowd. KTM reported that the 17-year-old kept building on his lead until he was lapping most of the riders in the field. He ended up crossing the finish line more than two minutes ahead of the second place finisher, fellow KTM rider Jeremy van Horebeek.