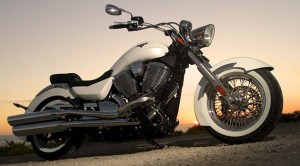 Victory Motorcycles has pulled the lid off on its 2013 lineup of cruiser bikes, including the brand-new Victory Boardwalk.[/caption]

Victory Motorcycles has pulled the lid off on its 2013 lineup of cruiser bikes, including the brand-new Victory Boardwalk.

The new Boardwalk is powered by the Victory Freedom V-Twin 106 cubic-inch engine and is designed for cruiser enthusiasts. The two-piece motorcycle seat is a scant 25.9 inches off the ground, giving riders who prefer the "low" look something to salivate over.

With 16-inch spoked wheels fitted with Meltzer motorcycle tires, plenty of chrome and a choice between Pearl White or Gloss Black, this is one mean-looking machine that should fit nicely into Victory's lineup. Victory says that while the bike is built as a cruiser, it can be transformed into a "bagger" through the use of saddlebags that attach to the back fender.

The rest of the 2013 model lineup doesn't look too groundbreaking, as most of the 2012 models are returning with no major changes aside from some new paint schemes. Altogether, Victory has 14 models on the slate for 2013, spread across the cruiser, tourer and bagger categories.