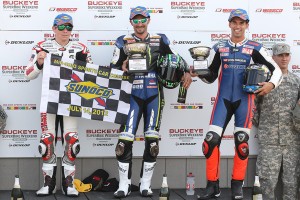 Josh Hayes has tied the AMA Superbike record for consecutive wins in a season with seven after back-to-back victories at the Mid-Ohio Sports Car Course.

In the first race, Hayes cruised to an easy victory after his teammate, Josh Herrin, crashed out of the race. With Herrin gone, none of the other riders could really challenge Hayes, leading to the easy win.

The second race was better from a spectator's point of view. The race was a classic duel between two riders - Hayes and Suzuki's Roger Lee Hayden. Hayden challenged Hayes at several points and actually got in front several times toward the end of the race. In the end, it was not to be and Hayes picked up his record-tying seventh win in a row.

It was not a good race for Blake Young, who was second in the first race and is the closest to Hayes in the overall point standings. Young crashed early and only finished 13th in the second race, allowing Hayes to build his overall points lead to 67.

The victory was Hayes' tenth of the season and 26th all time. Hayes is now just one victory behind MotoGP racer Ben Spies on the all-time AMA Superbike wins list.