JCR Is Proud To Be Supporting Todd Potter At X Games 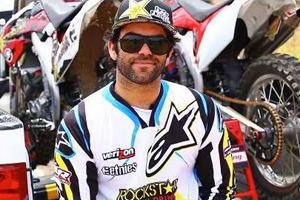 JCR is proud to be supporting Todd Potter as he enters into the 10th anniversary of X Games in LA.[/caption]

JCR is proud to be supporting Todd Potter as he enters into the 10th anniversary of X Games in LA. Todd is slated to compete in FMX on Thursday, Step up and Best Whip on Friday. With his eyes on the prize of several medals in 2012 and perhaps the most momentum of any rider, Todd's expectations are high. Be sure to vote for Todd in Best Whip this Friday. Check out this great video of Todd discussing how he sets up his JCR built Honda CRF450R for competition.

"It has been an exciting time working so closely with Todd Potter. We have already enjoyed some great success together. Todd is one of the favorites for multiple medals going into X Games. His natural ability, his confidence and his drive are going to be hard for any of his competitors to match. The life of riding and racing dirt bikes is at the core of JCR's DNA. Whether you are ripping your local track, camping in Ocotillo, adventuring thru Baja, riding the dunes of Glamis or competing at X Games we love it all here at JCR." -- Johnny Campbell

Go to www.XGames.com for all the latest info on the 2012 X Games.

The X Games produce a massive amount of content and delivers it on nearly every front imaginable. Here is a breakdown of what to expect from X Games 2012.

During X Games Los Angeles 2012, fans will be able to consume original X Games content on more platforms than ever before. ESPN will televise 21 hours of live HD programming on ESPN, ESPN2 and ESPN on ABC, June 28 - July 1 from Los Angeles, Calif. All 21 hours will also be televised on ESPN 3D. ESPN3 will stream 24 hours of live X Games coverage. In addition, X Center, the daily highlight show for the X Games, will also be shown in HD on ESPN2.

"The X Games brand has grown over the years and has become relevant to a wide audience across the globe and especially to youth," said Scott Guglielmino, senior vice president programming and X Games. "As always, our mission is to serve the fan whenever and wherever they want to consume X Games content. So we're making live X Games content available across multiple platforms and devices. We want to share the X Games experience with fans around the world and on whatever device they have with them."