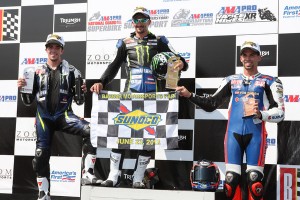 Like many of the competitions this year, the Barber races were all about two Yamaha riders named Josh. Hayes and his teammate, Josh Herrin, were well in front of all the other riders on the track. In the first race, Herrin was on Hayes' rear wheel the entire time, but ultimately couldn't pass the more experienced rider. In the second race, Herrin was out in front early, but couldn't hold off Hayes. Herrin was later passed by Suzuki rider Blake Young for second.

The two wins mean Hayes has won eight races so far this year, including five in a row. In addition, the win marked Hayes' first triumph at Barber and his twenty-fifth career Superbike win. Hayes is now fourth all-time, and will likely pass Ben Spies for third on the all-time victory list by the end of the year.