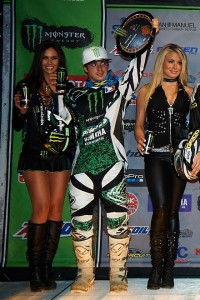 One of the rising stars in AMA Supercross has finally found a permanent home, as GEICO Honda recently announced they signed Zach Osborne for the 2013 season.

Osborne was relatively unknown when he appeared in the AMA Supercross Lites West class, but he quickly made a name for himself by getting on the podium twice in the first four races of the season. Many fans wanted to see Osborne continue in the competition, but he was already committed to the FIM World Motocross Championship in Europe.

After suffering a shoulder injury in Europe, Osborne is now headed back to the U.S. with Honda for the 2013 Supercross Lites competition. The young rider will join Justin Bogle, Wil Hahn and Zach Bell on 250cc Honda bikes next year.

"I get to join the team in October and start preparing for 2013. I'm super-excited about it. It's an awesome opportunity for me to be a part of such a great team like GEICO Honda," said Osborne. "I got a decent taste of Supercross this year, but it's good to know I'm going home to race full time and make a real run at a championship."