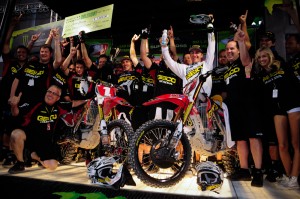 Justin Barcia wrapped up his AMA Lites Supercross career with a dominant performance at Sam Boyd Stadium in Nevada.

Nevada was the staging ground for the joint Lites West/East finale. Barcia was technically already the East champion due to clinching the title on points, but that didn't slow him down as he took to the track. The rider easily claimed first place in the Lites East event, then geared up for the East/West shootout, which he also won easily.

After his victories, Barcia announced he will make the jump to the big leagues next year, signing with the Honda Muscle Milk team to represent them in the 450cc class. Barcia will be given a new Honda CRF450R for the competition and will continue his relationship with the Japanese manufacturer.

"It's an awesome feeling to sign with Team Honda Muscle Milk," said Barcia in a team release. "It is something that I have dreamed of since being an amateur. I've been riding and winning on Hondas for years because it's the bike I feel best on. With a great team behind me and an amazing bike, I believe I can be a contender for the championship."