Casey Stoner Gets First Win Of The Season In Jerez 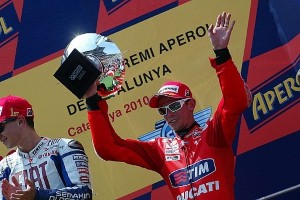 Going into the MotoGP race in Jerez, many fans worried about Casey Stoner's arm pump, a painful condition that cost him the race in Qatar. There were no such problems this past weekend, however, as Stoner blew past Jorge Lorenzo to take his first win of the season.

Lorenzo jumped out to an early lead in the race, but he wasn't able to hold Stoner off for long, reports CNN. After having some issues at the beginning of the race, the Australian rider maneuvered past Lorenzo and took the lead.

Stoner built up a 0.8 second lead on Lorenzo, but the lead began to disappear on the seventeenth lap. The situation mirrored the race in Qatar, where Stoner's arm pump caused him to fall back late.

This race was different, however. Stoner held off Lorenzo and eventually pulled even further ahead on the final laps, winning by 0.947 seconds. Lorenzo settled for second, while Stoner's teammate Dani Pedrosa took third.

Stoner was enthusiastic about the victory after the race.

"That is the greatest race I've ever done. I had a poor start and the conditions were dodgy at first but the bike was working fantastic," Stoner told the news source.