Kailub Russell Makes It Two In A Row

[caption id="attachment_11338" align="alignright" width="300" caption="It's no joke that Kailub Russell is a contender in the 2012 GNCC Series after he secured his second straight win - Photo: Krista Shaw"] 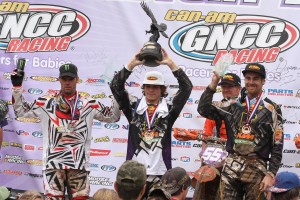 It's no joke that Factory FMF/KTM rider Kailub Russell is a contender in the 2012 GNCC Series after he secured his second straight win at the third round of the series on April Fool's day.

Russell had a horrible start to the day when he fired his bike late and rounded the first corner in dead last. He didn't let that hold him back as he quickly set to work and passed half the field after taking a great line in the second corner. By the third turn he was into the top three and a few moments later he was in the lead. Following his charge, was his teammate and the reigning GNCC XC1 Champion, Charlie Mullins. The champ moved quickly into 2nd place and began to pace Russell out front and pull from the rest of the class.

The two teammates quickly began to distance themselves from the rest of the field. On the fifth lap Mullins began to struggle with some health issues that caused him to tire and he relaxed his pace in order to finish the race.

The third member of the team, Cory Buttrick, also suffered from a bad start but quickly made up ground and was sitting in 7th place by the end of the first lap. By the fifth lap, Buttrick had moved into the top three and held his pace to earn 3rd overall and a visit to the podium with Russell who went on to take his second win of the year. 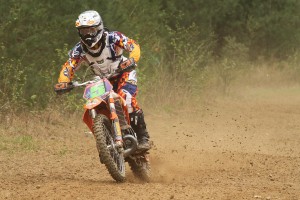 "It feels great to get another win today. My KTM 350 XC-F has been working flawlessly the past two races and my conditioning is great and everything is really coming together. I am still down a few points in the championship but with each race win I am catching up and moving closer to my ultimate goal of winning and XC1 Championship," remarked Russell.

Also on the gas, was KTM support rider Steward Baylor. He continued to top his previous performances taking the overall in the XC2 class with a 7 minute lead on the competition. Baylor's lap times were so quick he finished 2nd overall in the combined scoring. Now three rounds into the series, Baylor has a 22 point lead in the XC2 series.

In the Women's class, Factory FMF/KTM rider Maria Forsberg continued her win streak to take the win and remain undefeated in her class. For the first time in her pro GNCC career, she also finished on the morning class overall podium with a 2nd place finish just 4 seconds behind the overall winner. 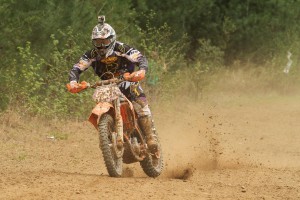 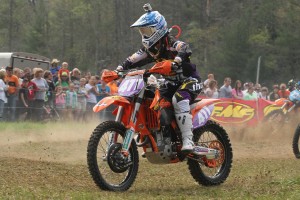