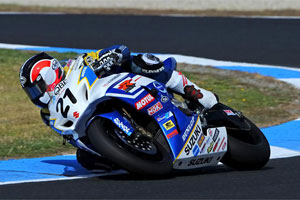 Run alongside the World Superbike Championship round, Waters was relentless in his pursuit for victory, claiming Pole Position and one-two finishes on to seal the overall.

Waters topped Saturday's Superpole session to take first on the grid with a 1:33.438sec lap around the scenic 4.5-kilometre ocean side circuit, setting himself up for a successful race day.

The first 14-lap race on Sunday morning saw the former Champion dominate from the outset aboard the brand new 2012-model GSX-R1000, winning by a comfortable 7.424sec margin with the fastest lap of the race at 1:33.925 seconds. Race two saw Waters finish a close second, just 0.499 seconds behind Wayne Maxwell. With his results, Waters claimed the overall on 46 points to lead the Australian Superbike Championship.

"The first race was great as I was able to get a good start and break away," said 2009 ASBK Champion Waters. "I was really happy with that and the 2012 model GSX-R1000 was faultless. In race two the heat was extreme. I tried and couldn't quite get away, so I let the guys past and then near the end of the race I tried again. I got caught up a little bit and couldn't quite get it done.

"It was a great way to start the Championship and get the ball rolling with the overall victory. The bike was really good - similar in a lot of ways to the old bike - but the engine is just really strong and I have a lot of confidence in the handling already. Hopefully we can carry this momentum into Darwin."

Team Volvo Group Suzuki satellite rider Robert Bugden finished a strong fourth overall with five-four finishes, with fellow Queenslander and Team Suzuki newcomer Ben Attard directly behind him in fifth for the weekend. Attard took a hard-fought third in race one before crossing the line eighth in the second race after experiencing tyre degradation.

"It was nice to get a podium in my first Superbike race for Suzuki, but also disappointing to experience the problem in the final race because I felt like we could have challenged for a third or fourth place," the experienced Queenslander said. "We've done a bit of testing, but in race conditions I felt like my feeling for the bike improved. I'm really looking forward to Darwin now and am confident that the 2012-model GSX-R1000 will be even stronger with extra development before that event."

Team Suzuki Supersport contender Brodie Waters commenced his 2012 campaign on the podium with third overall aboard the GSX-R600. Waters finished third in race one and fourth in the shortened second outing, which awarded half points due to the minimal amount of laps completed.

"It wasn't the way that we wanted to start the year, just because we struggled with the race set-up and didn't quite get to the level we needed to for the win," said Waters. "We'll work on that for the next round and hopefully be able to push for the win. Consistency will be a vital factor this year though, which is something that I learnt last year. You need to stay on and get points when you can, because third place is definitely better than nothing at all when it comes to scoring points for the Championship."

Team Suzuki manager Phil Tainton said that the weekend's results were a strong base to build from for the season ahead, looking forward to further developing the 2012 GSX-R1000 for upcoming rounds.

"Josh was great as always and adapted really quickly to the 2012 GSX-R1000, plus I'm really happy with the way Ben is riding, so it was impressive to see him in the top three during that first race," Tainton said.

"We're up a little bit in horsepower with the new bike, which is a great benefit at Phillip Island. It's very similar to the previous model bike; however the refinements are clear improvements and we have more to come from Japan as development continues. Brodie scored good points, but was struggling with grip in the heat. The GSX-R600 is fast, but we're working on improving edge grip. It's all going well and Brodie is riding well, but we didn't quite get it good enough for Brodie to win this weekend."

Sadly, 17-year-old Queensland rider Oscar McIntyre was involved in a fatal incident during the first Supersport/ Superstock race of the weekend on Saturday afternoon. Team Suzuki expresses its condolences to the family and friends of Oscar.

The Australian Superbike Championship will continue at Hidden Valley in the Northern Territory on April 20-22nd for round two of the seven-round 2012 season.


Round Results and Championship Standings