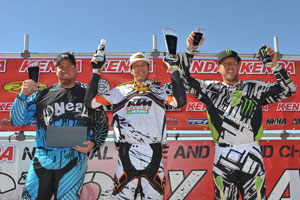 Factory FMF/KTM rider Kurt Caselli took a dominating win at the second round of the AMA National Hare & Hound Series marking his second win of the season.

Only two rounds into the series, Caselli remains undefeated in the Hare & Hound Series earning impressive wins at both rounds. At the Ridgecrest event, he started the event in 2nd position and passed early leader Destry Abbott within the first mile. Once out front he pulled to a three minute lead at the end of the first 47 mile loop. On the second, more technical loop, he strengthened his lead further to eventually cross the checkered flag seven minutes ahead of his competition.

"I was fortunate to get out front early today. The dust played a big factor for the guys behind me but I had a clean trail all day. My only worry was making sure I didn't get lost but I was able to ride at a comfortable pace the second loop that allowed me to focus on finding each marker without trouble and pulling away out front. I'm very happy to have two wins under my belt and plan to keep them coming as we get further into this championship," remarked Caselli.

Factory FMF/KTM Team Manager, Antti Kallonen, was equally excited about Caselli's win, stating, "We have made a big transition in Kurt's career this year to focus more on desert riding and it is definitely paying off. Kurt has had great results in the first two Hare & Hounds and now we are setting our sights on the San Felipe 250 which is coming up within the next month. We are very excited to bring KTM back to long-distance desert racing and with Kurt as our lead rider we are expecting great things." 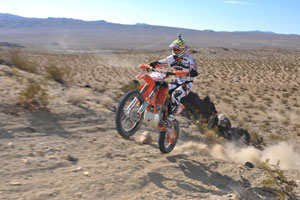