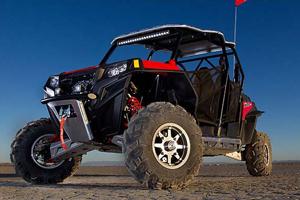 Four-seater UTVs are becoming more and more popular, and Polaris recently expanded the market with their new RZR XP 4 900.

In previous model years, the RZR 4 was it's own model, and the RZR XP was simply a high-performance version of the regular RZR ATV. Now, up to four passengers can enjoy the increased power of the XP engine.

With a 875cc DOHC Parallel Twin Prostar engine that produces 88 horsepower, drivers should have plenty of juice to tackle the toughest terrain with up to three of their buddies. The vehicle's three-link trailing arm independent rear suspension allows the model to reach very high speeds on tough terrain without slowing down. The model will also include Premium Walker Evans rear shocks as a standard feature, which Polaris claims as an industry first. 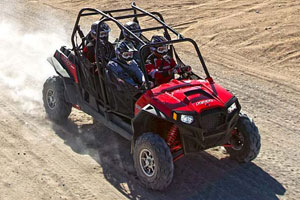 With four people riding in the vehicle as opposed to just one in the normal RZR, Polaris had to do some work adapting the chassis to work with the new engine. One welcome addition is more than a foot of ground clearance, which will definitely help when the vehicle is weighed down with four passengers.

All in all, the Polaris RZR XP 4 900 is one of the most powerful four-seaters on the market and should be able to handle just about any terrain.