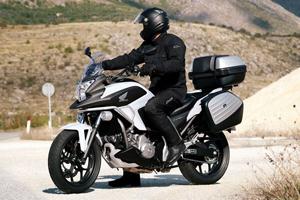 The NC700X is one of three new bikes bearing the NC700 name. The X model is considered to be a crossover bike, mixing a standard commuter model with an adventure motorcycle.

One distinguishing feature of the bike is its placement of the fuel tank - it's underneath the motorcycle seat. On the back, where the fuel tank would normally be, riders will find a spacious storage case capable of fitting a full motorcycle helmet.

In terms of mechanical features, the NC700X and its siblings use the company's new eight-valve 670cc Parallel Twin, which will also be seen on the upcoming Integra scooter. The bike also features the company's Dual Clutch Transmission, which first appeared on the VFR1200F, although its not a standard feature. Those worried about safety can also invest in an optional anti-lock brake system as well.

Overall, the NC700X is a good choice for riders on a budget, as the model's $7,000 price tag for the base model will likely attract quite a few buyers when it hits dealerships this summer.