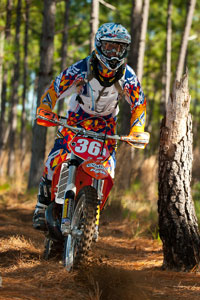 The 17 year-old, Steward Baylor, continues to impress off-road fans with his fast-speed and technical abilities on his KTM motorcycle at such a young age. Today he stepped up his game again when he took his first-ever pro career AMA National Enduro Series win.

Baylor has been setting records throughout his teenage years in the GNCC Series and he was most recently crowned the GNCC XC2 Lites Champion in 2011. He took the past two and half months that made up the off-season and trained hard to come out to the opening round of the AMA National Enduro Series in Sumter, SC and make himself and his Ride PG/KTM Team a threat for the championship.

The Georgia native was impressive from the start to the end of the race. He took three of the six special test wins in order to claim his first victory. He was strong in each section only making a mistake in the fourth test where he hit his head on a tree branch that he wasn't able to duck under. Luckily, he was okay and came back to finish second fastest in the fifth special test and first in the final test.

"It feels great to come out to the first round and get the win," remarked Baylor. "I have been training really hard over the past year to increase my sprint speed and I think it shows today. I'd like to thank my team and my family for their help to get me to this level in my racing." 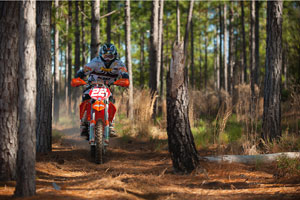 Charlie Mullins struggled but came on very strong in the second half - Photo: Shan Moore

Joining Baylor on the podium was 8-time National Enduro Champion Mike Lafferty finishing in the runner-up position and fellow KTM rider Charlie Mullins who put his FMF/KTM on the final podium step.

Mullins, who finished second overall in the 2011 championship, struggled at the beginning of the race but came on very strong in the second half taking a section win in the fourth test. His second half charge was just strong enough to knock his teammate Cory Buttrick off the podium. Buttrick put in a great race just finishing 12 seconds off of Mullins in the overall times.

The final member of the Factory FMF/KTM Team and the reigning National Enduro Champion, Russell Bobbitt, had a rough start to the season. Bobbitt, who was injured in mid-November, has only been back on the bike for three weeks and suffered from a lack of endurance in the longer tests.

"I broke my wrist in November and it is still really sore when I ride for a long distance," stated Bobbitt. "There were a few long tests today and it was hard for me to maintain the race pace. I have a few weeks before the second round and I think that will really help me build up my endurance to be competitive for a podium position from here on out." 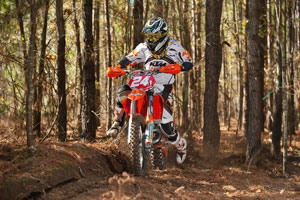 Factory FMF/KTM Team Manager, Antti Kallonen, was very excited with the outcome today, "We are excited for Steward to get his first win. He has been riding very strong over the past year. We are also excited that our FMF/KTM riders Charlie and Cory were battling for the podium throughout the day. We know Russell suffered some endurance problems but he always bounces back and we will help him over the remainder of the season to get back to race speed. Overall it was a great start to the weekend for our KTM riders." 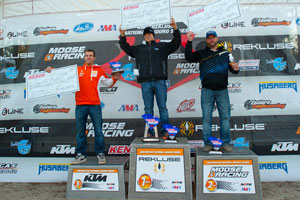 Husaberg Factory rider Mike Lafferty put together a strong showing at the opening round of the AMA National Enduro Series with a 2nd place finish.

Lafferty rode strong throughout the entirety of the race. He finished 3rd and 2nd in the first two special tests respectively and came out on top with a win in the third test. "The course conditions were decent and suited my style," remarked Lafferty. The race was comprised of six special tests which mostly consisted of sandy terrain. Luckily, rain the week prior to the event had kept the ground rather moist and helped control potential dust problems.

In six tests, Lafferty only fell outside of the top three on one test. He made a brief mistake in the fourth test and finished 4th fastest in that section. He rebounded quickly and took the win in the fifth test and finished 2nd in the sixth test. His consistency paid off and awarded him the runner-up position at the opening round.

"I am very excited with my result today," stated Lafferty. "It's great to know that my hard work has paid off and I was running the lead pace." Lafferty finished 40 seconds behind race winner Steward Baylor and a minute ahead of the 3rd place rider, Charlie Mullins. 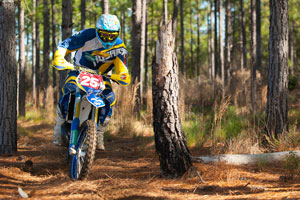 Lafferty's teammate, Nick Fahringer, finished the opening round in 13th position after struggling with his fitness throughout some of the longer test sections. Fahringer has been off the bike for four months recovering from an ACL injury. His strongest test was the third test where he finished 8th. "I am definitely upset that I wasn't closer to the top runners," mentioned Fahringer. "But I am glad to get through the first round and finish without injury. I have a few weeks before the next round and I know every day on the bike will help my progress. It's going to be a long road to recovery but I am excited to work toward the goal of getting back on the podium."