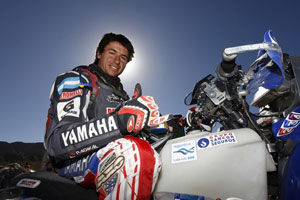 For the second year in a row Yamaha dominated the Quad category of the Dakar rally, sweeping the final podium and claiming every stage of the 9000km trek through Argentina, Chile and Peru.

Alejandro Patronelli defended his crown ahead of his brother Marcos and fellow Argentine Tomas Maffei. The winner headed the stage time sheets three times from thirteen results (stage six was cancelled due to poor weather) and his consistency on the YFM700R Yamaha was unbeatable as he dropped out of the top two positions only twice.

Marcos toasted two wins to be runner-up and Maffei celebrated three, the last of which came in the closing fourteenth stage.

"I can't believe the Dakar is over," said Alejandro on www.dakar.com. "It was difficult at times but everything turned out okay. It's my second victory. It's very hard to win twice in a row. Last year I suffered a lot with my hand pain but this year everything was perfect from the beginning to the end. I'd like to thank everyone who cheered me on."

Camelia Liparoti was again the top female participant in the Dakar and was thrilled to beat her 2010 ranking of 10th spot by one position on this occasion. The French-Italian made it to Peru in 9th with five top ten classifications in the stages.

"The Dakar is a very tiring thing but I did it!" she said. "One of the best parts was the addition of Peru to the rally. It was similar to Africa with all the big dunes. I would have liked to have done better but had problems with the fresh terrain on the first day in Peru and lost so much time. It feels like the two weeks have flown by and I'm ready to do better in 2013!"