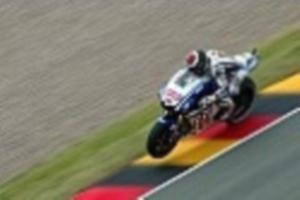 Many tracks around the world are looking to get on the MotoGP schedule, and it always helps if a MotoGP rider gives his seal of approval.

While former World Champion Jorge Lorenzo was in India doing some promotional work for Yamaha, he had a chance to take a few laps at the Budh International Circuit. Lorenzo rode a Yamaha R15, which is the 150cc four-stroke version of the Yamaha R1/R6 that's sold in India. Other select R15 owners got the chance to join Lorenzo on the track as he tested it out.

"It's been great to visit the Budh circuit today," said Lorenzo in a Yamaha release. "The track is very modern and wide. I think it is quite prepared and ready to be on the [MotoGP] calendar. I believe it will be exciting to ride with many overtaking opportunities. The Indian people I have met have been very kind and gentle, I would like to see more of India in the future with more time; we didn't get to see so much in just two days here."

Next up on Lorenzo's tour of Asia is a stop in Jakarta, Indonesia, where he and Ben Spies will be doing promotional events for Yamaha ahead of the first test of the MotoGP season in Sepang.