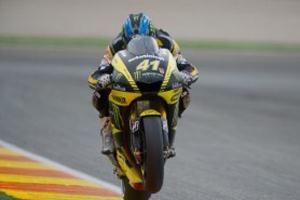 Yamaha has announced their 2012 AMA Road Racing teams, with Josh Hayes back to try for a third-straight AMA Superbike Championship.

If Hayes does end up winning the title again this year, he'll match the feat completed by American Ben Spies, who later moved up to MotoGP. Hayes had his own taste of MotoGP last month when he filled in for an injured Colin Edwards in the final race of the season. Despite having never ridden a MotoGP bike before, Hayes finished in an impressive seventh place and earned high praise from the Yamaha crew he worked with.

Also joining Hayes on the Monster Energy/Graves Motorsports R1s is Josh Herrin, who is moving up from the Daytona SportBike class.

"I'm stoked to get to race the new 2012 R1," Herrin said. "Josh Hayes and I have been teammates for a few years, and he's been a tremendous help to me. Now, we'll be out on the track together and in the same class. I couldn't ask for a better teammate than Josh or a better bike to be on than the R1... and in the American SuperBike class, too."

Cameron Beaubier will return for the Daytona team, where he will be joined by newcomer Garrett Gerloff, who turned pro last year at just 16 years old.