Criss Angel To Auction Off Motorcycles In Vegas 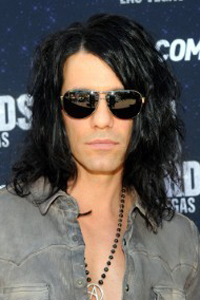 Those who have watched the series "Criss Angel: Mindfreak" likely know of the illusionist's penchant for motorcycles, which he often includes in his death-defying stunts. Angel is an avid rider and collector, but recently made the decision to sell off a portion of his massive collection to the public at auction.

Angel's bikes will go up for sale from January 12th through the 14th at Auction America by RM's inaugural Las Vegas sale at the Rio All-Suite Hotel & Casino. Angel is actually performing in Sin City as well, with the "Criss Angel Believe" show at the Luxor Hotel & Casino. The magician will be at the auction and present each winning bidder with two tickets to his show as a bonus.

"We're thrilled to have been selected by Criss Angel to present a portion of his unique collection at our inaugural Vegas sale," said Donnie Gould, president of Auctions America by RM. "We look forward to bringing the same level of energy, excitement and magic to our auction stage in January."

Eleven bikes in all will be up for sale, but the most enticing is the 2010 Campagna T-Rex 1400cc motorcycle, which is capable of zero-to-60 in 3.9 seconds and was used in Angel's "Grand Canyon Death Jump." Expected to retail for more than $55,000, the like-new bike has just 65 miles on it.