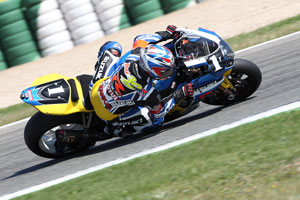 No matter how much focus and development paid to the rider or the bike, there is only part of this package - if everything's going to plan - which touches the road; and that's the tires. Get these right and you're winning. Get them wrong and you will know about it. Fortunately, in Dunlop, Suzuki has a dedicated partner in the FIM Endurance World Championship (EWC).

Operating out of Birmingham, England; Dunlop Motorsport provides tires to a vast range of motorsport categories on both two wheels and four.

Tire construction used to be considered a black art. Today it is very much a science; but the element of art remains in the skill of mixing the ingredients. New materials, compound technology and digital tools have opened up many new avenues for tire designers and compounders. 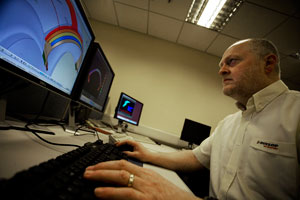 The basic processes of compound mixing, tread extrusion, tire building and curing remain, but underneath the changes are profound.

The life of an EWC tire used by recently-crowned 2011 World Champions Suzuki Endurance Racing Team (SERT) begins in the modelling room using advanced computer simulation software: This predicts properties, such as spring-rate and camber-thrust, allows research of alternative composite materials, and finds the optimum profile; and can also take up to a week to run.

The engineers then construct 3D models using sophisticated CAD software to visualize the intended tire. Finite Element Analysis (FEA) will depict any high load areas which could generate heat. Only when all the computer work is finalized is metal for the tire molds cut. 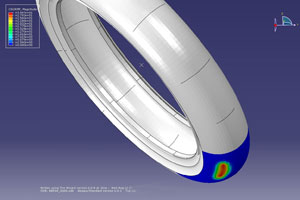 Tire building begins with fine layers of specialist materials such as POK, PEN, PBO, and Carbon Fiber as well as regular materials like polyamide and rayon to form the carcass basis. Within lies a true secret - the constructional components which make up the basis of Dunlop's NTEC. The fantastic stability of NTEC offers the ability to run at lower inflation pressures, resulting in improved side-grip, durability, traction and feedback.

Race tires can go much further. Dunlop engineers have collated silicon laser scans of each major circuit, enabling the engineers to differentiate and categorize the tracks depending on their severity. This, combined with historical data and telemetry, determines the compound modulus for each application. 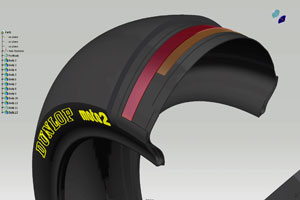 Dunlop Motorsport's latest manufacturing technology now enables the finest sliver of a given compound to be applied to a designated part of the tread with pin-point accuracy, which optimizes performance on individual corners.

Dunlop's tires must be consistent over a wide range of operating conditions. Stringent quality control analyses each tread compound before construction; each finished tire is X-Rayed and checked for uniformity and balance.

The FIM Endurance World Championship provides an ideal venue for Dunlop to demonstrate and refine its technology, as it's an open tire formula. And it's highly competitive, as demonstrated by the 2011 Le Mans 24 Hours race where three tire and three motorcycle manufacturers were represented on the podium. Competition drives progress for Dunlop Tires and for Suzuki; and it's why they take to the track.