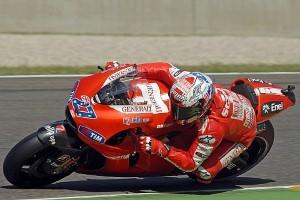 The final race of the MotoGP season ended up reflecting the overall standings: with Casey Stoner on top.

The Australian shot out to an early lead, but it wasn't one of the dominant performances from earlier this year. American Ben Spies surprised many by pushing past Stoner late in the race. However, Stoner didn't give up and was able to produce an amazing run in the last stretch to edge past Spies by .015 seconds.

"We were able to catch Ben going right into the last turn," Stoner told Cycle News. "Came out and got a fantastic drive. I don't think I think could've got any better run going into that last straight and managed just to pip him on the line. So sorry to Ben, but yeah we're very happy to end the season like this."

Stoner amazingly finished on the podium in every race that he completed this year, with his only blemish coming when he was forced to withdraw from one race due to an accident.

Andrea Dovizioso got on the podium as well with a third place finish, and was even in front of Stoner at one point in the race.