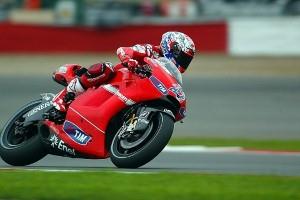 Josh Hayes, filling in for Colin Edwards, was impressive during his first ride ever on a MotoGP bike during Friday's test in Valencia. Hayes has been thrown into the figurative fire as a last-minute replacement who has never ridden a MotoGP machine before, but his initial times during testing looked to be squarely in the middle of the pack.

Hayes ultimately ended up with the 15th-fastest time in the morning session, but improved once the afternoon rolled around, climbing up to tenth. At one point, Hayes was as high as fifth overall before other racers passed him.

Continuing his dominance even though he has the championship wrapped up, Casey Stoner was the fastest rider, followed closely by his Honda teammate Dani Pedrosa. Valentino Rossi had an encouraging time in third place after a somewhat disastrous season. Nicky Hayden and Loris Capirossi closed out the top five.

It was slightly bad news for Ben Spies, who finished sixth in the morning session but did not race in the afternoon. The American rider may have injured his ribs during testing, reports Cycle News.

Many of the riders had affixed decals with either Marco Simoncelli's name or number to their bikes as a tribute to the fallen rider.