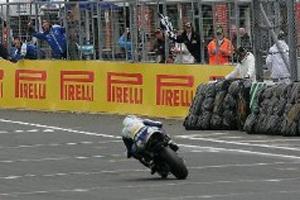 The rider carousel continues in World Superbike, as it was recently announced that the displaced Leon Camier has signed on with Suzuki.

Camier was previously riding for Aprilia, but lost his spot to the newly-signed Eugene Laverty. Camier wasn't without work for long, however, as he's put pen to ink on a new contract with Crescent Suzuki. The team fielded John Hopkins for the competition this past season, who just narrowly missed out on the championship, ultimately settling for second place.

"I am absolutely thrilled and excited to be joining the Crescent team and with the opportunity to ride the GSX-R1000," Camier said in a team release. "My first two years in World Superbike have been tough, but I've learned a lot and had some good results to build on, so this is a great opportunity for me. I'm really looking forward to the new season and I believe that the Suzuki GSX-R is certainly a very capable bike, especially with the technical plan the guys have in place. This is a fantastic chance for me to take the next step in my career and I'm very thankful to the guys at Crescent for giving me the opportunity."

Crescent says they will soon announce a teammate for Camier, as well as an overall sponsor for the team.