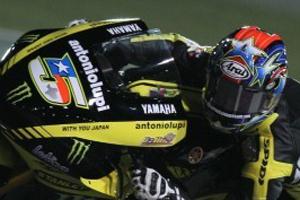 It's difficult to think of MotoGP racing in the same way since Marco Simoncelli's fatal accident last week, but the series plans to move on with the finale in Valencia, with a tribute to the late rider in the cards.

Colin Edwards, who was involved in the terrible accident, has announced that he will not be able to attend the race, as he is still recovering from serious injuries from the crash. Edwards broke his left arm and severely bruised multiple other parts of his body. The Yamaha rider will undergo surgery to repair the damage, but he won't be able to travel afterwards.

"Firstly, I want to thank everybody for all their messages of support since Sunday," Edwards said in a team release. "The support and love has been overwhelming and it has been a great comfort to me at this difficult time. My heart goes out to the family and friends of Marco and I will miss him a lot, as will the entire MotoGP family."

Simoncelli was laid to rest at an emotional funeral on Thursday, with thousands in attendance. Edwards said he watched the service on the internet with his wife.

Edwards' injury could possibly mean that AMA Superbike champion Josh Hayes will ride in the race as a replacement, as he was scheduled to test the Yamaha bike after the race anyways.