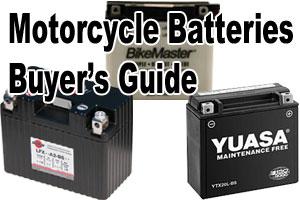 One of the more overlooked but critical components of motorcycle maintenance is the battery. Dedicated riders will pay plenty of attention to the engine and spend time modifying other parts of their bike, but it doesn't mean anything if your bike is dead when you go to start it. Whether you've had your bike for a long time and are thinking about replacing the battery or simply want to know the different types of batteries on the market, it's important for riders to educate themselves on the ins and outs of motorcycle batteries.

The key issue in the motorcycle battery market today is between lead-acid batteries and new Lithium Iron Phosphate (abbreviated as LFP) batteries. LFP batteries are a subset of the lithium ion models that have become popular in nearly every application, from laptops to electric vehicles.

The lithium ion manufacturers claim that their battery is better in nearly every way, but some say that there was nothing wrong with the lead-acid batteries that have been used for decades. In addition, LFP batteries are usually 2-3 times more expensive than their lead-acid counterparts. So those shopping for a battery have a bit of a dilemma on their hands. In this guide, we'll examine the advantages and disadvantages of each so that drivers can determine whether they want to shell out the extra money for the lithium models.

One of the reasons these batteries have become so popular in just about every application they are used is weight. Ever wonder how laptop manufacturers have gotten their computers to be almost paper thin? A large part of that is due to the continuing decrease in weight of lithium batteries. The use of these batteries for powering motorcycles and other vehicles is somewhat new, so companies may even decrease the weight further in the future. Shorai offers lithium ion batteries. 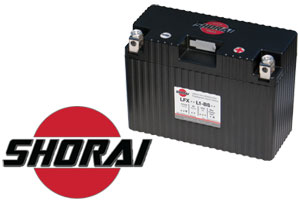 Right now, however, a Shorai lithium battery weighs in at about 1.5 pounds. Anyone who has ever picked up a lead-acid motorcycle battery will tell you that this is a significant reduction in weight - almost a whole five pounds lighter than many lead-acid batteries. If you're a racer of any kind, that statement probably has you licking your lips, and indeed the vast reduction in weight is one of the key reasons that lithium batteries have become popular with motorcycle riders.

Then again, this could also be a point for lead-acid batteries. If you don't race or simply like your motorcycle to get you from point A to point B, you might not be entirely sold on the fact that you'll need to spend double or potentially even triple the money on a battery just to save a few pounds that you don't even really care about to begin with.

Weight is not the only advantage for lithium batteries, however. LFP batteries are relatively new to the market, so its impossible to test all of the manufacturers' claims. Shorai and other lithium battery makers say that their batteries have an improved shelf life that will ultimately outlast lead-acid models. However, it's impossible to know exactly how long they last in motorcycles, as they have not been on the market for longer than their supposed shelf life.

We do know that when used, the lithium batteries do not sulfate or degrade over time. Meanwhile, lead-acid batteries will typically have a limited number of charge-discharge cycles, meaning they can only be started and powered down so many times before they go kaput.

That being said, whether or not this is a true advantage depends on your outlook. In many ways, lead-acid batteries last "long enough." They typically hold a shelf life of five years or more, which is also the shelf life that many owners give their bikes in the first place. If you're the type to change models every few years, you probably do not even need to worry about running out of battery life. 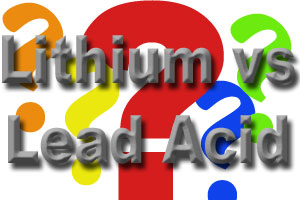 Also, a longer shelf life is not a reason to buy a battery in and of itself. Okay, a lithium battery may outlast a typical lead-acid one, but it's possible that you could buy two lead-acid batteries for the price of one LFP model. Many predict that the price of these batteries will come down as the technology becomes more popular, but it's not quite there yet. If somehow you got the same price between lead-acid and lithium batteries, however, the lithium would likely last longer.

LFP batteries also tend to provide a bit more power on the start. In tests of the batteries against lead-acid ones, the voltage was just a bit higher on the LFP batteries, which should provide a bit more initial power to the bike. This might be useful if you start your bike a lot in the dead of winter and have trouble getting your engine to turn over. Again, however, this is a minor difference that many bikers may not even be able to perceive.

When it comes to installing an LFP battery, the process is relatively simple. There are no major modifications that need to be done, it's simply a matter of taking out the old battery and putting a new one in its place, being sure to connect all the right wires. One thing to keep in mind is that since the LFP batteries are so much smaller, the battery compartments that most bikes have will likely be larger than necessary. However, many LFP manufacturers provide foam pads with their batteries, so owners can fill up the empty space in their battery compartments and ensure things don't move around too much.

Those who do extensive work on their bikes have reported that the smaller batteries are a bit easier to work with. Some people like to move their battery compartment so that they can make other modifications to the motorcycle, and it goes without saying that this is a lot easier with a 1-pound battery than a 6-pound one - it can be installed almost anywhere.

In the end, there are definitely advantages to lithium and LFP batteries. They outperform lead-acid models in just about every way, with no significant disadvantages. The only thing bikers really have to consider is price and weight savings. As is the case with nearly all motorcycle parts and accessories, you get what you pay for. The lead-acid batteries will probably get the job done for many riders. But it appears that for the moment, LFP batteries are the top-of-the-line parts.