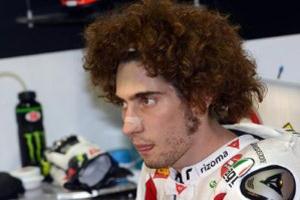 MotoGP racer Marco Simoncelli was able to test the bike that he will be riding next year for Team San Carlo Honda Gresini, the Honda RC213V.

Simoncelli recently signed a one-year contract extension with the team after speculation that he could be on his way out of town. The Italian rider followed that up with an impressive fourth-place finish at Motegi in Japan.

After the race, the team was able to get him some track time on Monday, where he hopped on the brand-new RC213V and took a few laps around the track. Simoncelli said he was happy overall with the results and the chance to be back with the team.

"The big day finally arrived and I was able to test the bike I will be riding in Team San Carlo Honda Gresini colors next year," Simoncelli said in a team release. "It was a fantastic experience to get out on the RC213V and I would like thank HRC for the opportunity. I completed 50 laps and quickly felt confident with the new bike, setting similar lap times to the RC212V."

Simoncelli said he provided the team with some feedback on the new model. He's now off to a brief vacation in the Philippines before the next race in Australia.