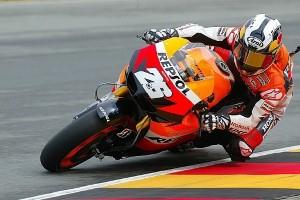 It was a very eventful MotoGP race at Twin Ring Motegi, but Honda rider Dani Pedrosa was able to come through unscathed as he rode to a relatively easy win.

There was lots of action early on, but Pedrosa was not involved in any of it. Valentino Rossi suffered an early crash when he ping-ponged between Jorge Lorenzo and teammate Ben Spies. The other two riders were able to ride off with no issues. Rossi blamed Lorenzo for the crash after the race, saying he unexpectedly braked, but Lorenzo said he thought it was Rossi's fault.

Australian Casey Stoner was originally in the lead, but ran into trouble on a straightaway when his brakes did not work correctly, sending him off the track into the gravel. He eventually recovered to finish third.

Meanwhile, Marco Simoncelli, Andrea Dovizioso and Cal Crutchlow were all assessed penalties after they jumped the start. That allowed Lorenzo to slip into second behind Pedrosa, who eventually rode away with the win.

"Yeah, obviously when you win it's a great feeling and in the last races I was always second, so finally to get the win is a great feeling," Pedrosa said. "Also because here I had mixed feelings. I had good races from the beginning and also I had some injuries and crashes."

Last year, Pedrosa broke his collarbone on the very same track when the throttle stuck during a practice.