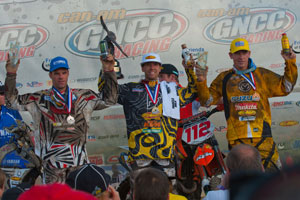 Factory FMF/KTM rider Charlie Mullins earned his fourth win of the Grand National Cross Country Series and strengthened his points lead to a 17 point cushion with his victory at round 11 of the series held in Somerset, PA.

Mullins got off to a 3rd place start behind holeshot winner Paul Whibley and Josh Strang. Close to Mullins was WMR/Clockwork/Planet Fitness/KTM rider Nate Kanney and Mullin's FMF/KTM teammate Kailub Russell. Husaberg rider Mike Lafferty fell in the 2nd corner off the start and managed to charge back up into lead group by the end of the first lap to add another member to the now six way battle.

It was Strang who led the group at the first check point with Russell moving around him and taking the lead on the second lap. Mullins was able to move around Russell on the third lap. He chose to pit on the fourth lap allowing Russell and Strang to get around. Russell held the lead on the fourth lap and pit on the fifth handing the lead back to Mullins. With two laps to go Mullins put on a charge and stretched his lead. He went on to take the win by one minute and twenty-eight seconds over the rest of the field. While he cruised to an easy victory out front, the battle that ensued behind him was anything but simple. 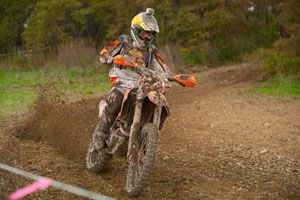 Russell who had a sizeable gap on Strang for 2nd looked like he would finish in the runner up position heading into the final lap. Unfortunately, the KTM rider suffered a bad fall in the rocks injuring himself and losing a few positions. He was able to pick up his bike and continue the race but was unable to ride at the pace he was before and he ended up finishing 5th for the day. His crash handed 2nd place over to fellow KTM rider Kanney who had made a decent charge through the pack to get by Strang and Whibley. With three corners to go, Whibley put an aggressive pass on Kanney to move into 2nd. Kanney tried to charge back but slid out in the corner losing another position to Josh Strang. Kanney crossed the line in 4th position.

"This was a challenging course today," remarked Mullins. "The track was pretty moist from rain on Friday and some of the natural springs that were in the woods. It was the rockiest of all the courses we have raced this year and you just had to ride hard but careful. I think we all fell a few times which made for an interesting race. I am just glad I was able to focus on my own race at the end and take another win." 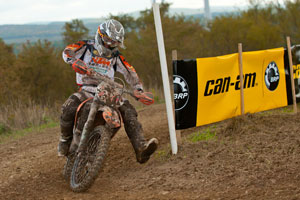 In the XC2 class, current points leader, Steward Baylor, struggled with a hurt shoulder and was only able to finish 5th on the day. He was joined in the top five by two other KTM riders, Andrew Delong who finished 2nd overall and Jake Korn who finished 4th in his first GNCC race of the season. Despite finishing outside of the top three at the Mountain Ridge GNCC, Baylor still holds the series points lead with a 29 point gap over Jason Thomas.